Preservation of biodiversity within Europe is widely acknowledged as an important goal not only for the intrinsic value of biodiversity but also the important assets it provides in ecosystem services and associated human well-being. Key to counterbalancing loss of biodiverse land due to continued infrastructure development and land-use change a level of investment in conservation protection and research is critical. Currently c. 100,000 protected areas across Europe cover c. 6.2 million km2.

My research has examined public expenditure on protected areas and biodiversity conservation within the 18 countries[1] which are both member states of the European Union and the Organisation for Economic Co-Operation and Development to identify how effective public funding has been and whether ecological or economic factors are the driving force for gazettment of new protected areas.

Data from the assed ten-year timeframe from 2004-13 reveal that in all countries the number of protected areas cumulatively rose by 28%, as well as the area covered by two thirds. Across all countries the public expenditure stagnated relative to other expenditure and at no point did any country commit more that 0.35% of its GDP to conservation measures. Additionally, the analysis reveals large-scale disparities in conservation expenditure per area, e.g. 4,600 EUR in Estonia and c. 953,400 EUR in Portugal in 2006. The financial resources spent on average per km2 in 2013 still fall significantly below the EU-recommended 6300 EUR per km2.

Multiple linear regressions indicate that only financial factors and no land-use variables or stressor associated with high opportunity cost of land contribute. Therefore, protected areas are currently regarded as an economic consideration.

Thus while a commitment to more protected areas and continued investment by all countries appears to have occurred over the past 10 years, the monetary investment has not increased. In order to bring around the necessary change in conservation paradigms such as the identification and conservation of biodiversity for the natural capital it provides and development of resilience against long-term stressors such as climate change, this lack of funding is a serious omission in the budgets of all examined countries. Furthermore, the disparity between countries’ conservation finances supports a strong case for more bilateral and regional co-operation within conservation design and upkeep of networks.

This blog is based on research currently under review for publication.

We will be launching the Local Ecological Footprinting Tool (LEFT) on Friday 7th October in Oxford. This is the latest development phase of our web-based decision support tool for assessing ... END_OF_DOCUMENT_TOKEN_TO_BE_REPLACED

Latest on the Humbug project

Our database of mosquito recordings is growing with considerable help from the CDC in Atlanta, Dr Sheila Ogoma at USAMRU-Kenya, Alex Fyfe at the Jenner institute amongst others; it now ... END_OF_DOCUMENT_TOKEN_TO_BE_REPLACED

Preservation of biodiversity within Europe is widely acknowledged as an important goal not only for the intrinsic ... END_OF_DOCUMENT_TOKEN_TO_BE_REPLACED

Meeting the President of Madagascar 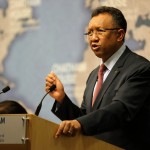 Meeting my President at Chatham House in London was a day to remember for me! I am a Merton College final year DPhil candidate working with Professor Kathy Willis in the ... END_OF_DOCUMENT_TOKEN_TO_BE_REPLACED

What are we rewilding for?

By Elizabeth Jeffers One of the primary objectives of rewilding* projects is the restoration of important ecological processes that have been lost due to the past extirpation of key members ... END_OF_DOCUMENT_TOKEN_TO_BE_REPLACED