Encased within the unique Ryhnie Chert fossil system are some of the best-preserved early land plants in the world. Using pioneering digital technologies, we were able to reveal the developmental secrets of a transitional rooting organ which has laid hidden for over 400MYA. Understanding the evolutionary origins of roots is of fundamental importance, and this collaborative project showcased how applying innovative computational approaches to paleobotany can shed light on the deep past. 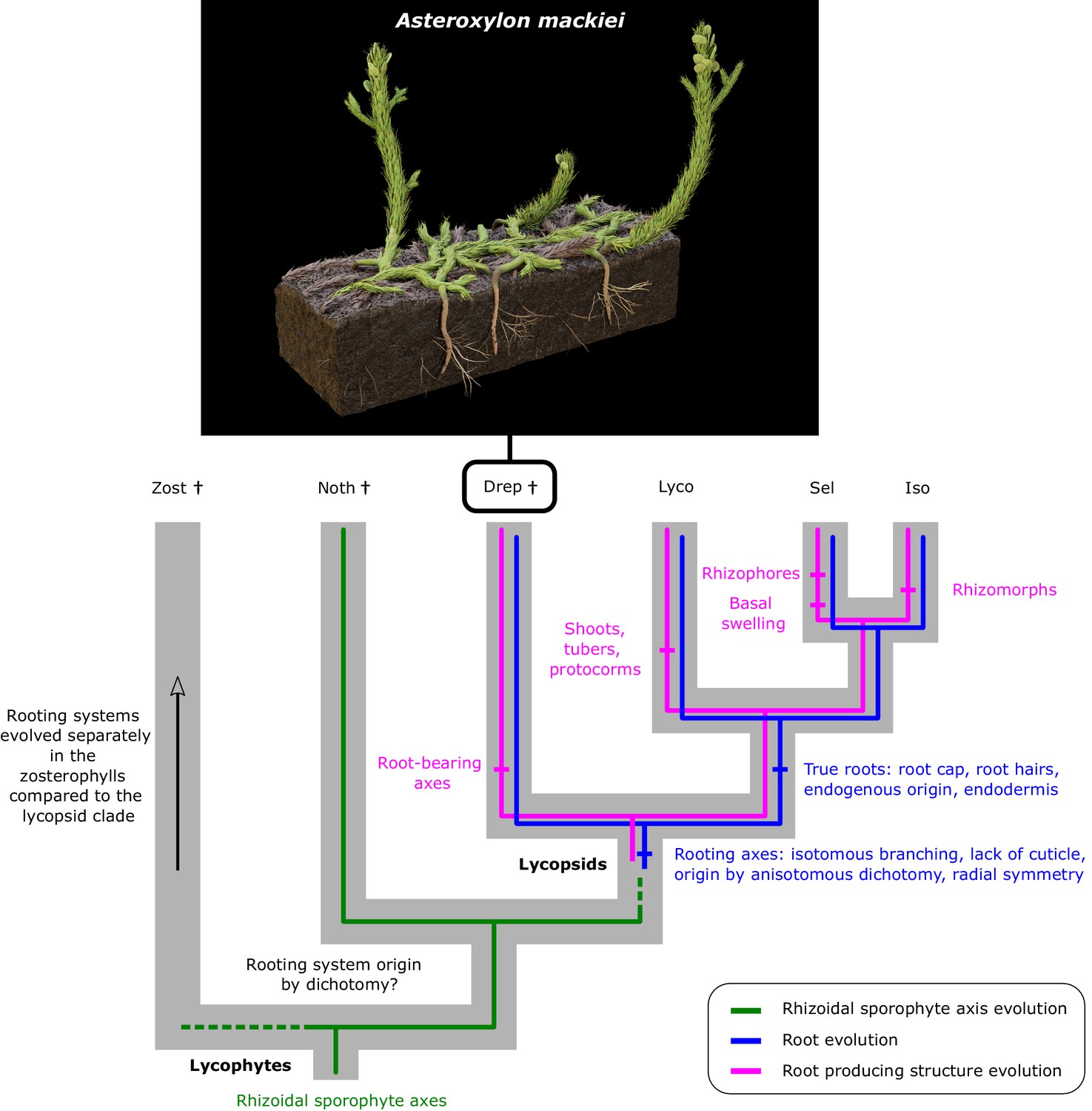 The Ryhnie chert is an early Devonian fossilised ecosystem dated 407 MYA found in the village of Rhynie in Aberdeenshire, Scotland (Wellman, 2006). The hot springs ecosystem was preserved in situ and provides a uniquely detailed snapshot of early plant life (Edwards et al., 2018).
In this collaborative project we produced digital 3D reconstructions of Asteroxylon mackiei, the most complex plant preserved in the chert using both thin and thick sectioning.
Previous work by Hetherington and Dolan on A.mackiei led to the discovery of the oldest know meristems of rooting axes, supporting the hypothesis of several step-wise and independent origins of roots in land plants (Hetherington and Dolan, 2018).
Thin sections provide continuous cross-sectional views through the preserved plants at cellular resolution. Thin section microscopy revealed the earliest cellular details of “rhizoid-based rooting systems, germinating spores and fossilised meristems”. A highly detailed 3D reconstruction of a rooting axis was also produced from a historical thin section collection.

Thick sections however provide a better option for reconstructing entire body plans of preserved plants. Thick sections were used to digitally reconstruct the body plan of several A.mackiei plants. The resulting evidence-based body plan was more similar to more widespread members of the Drepanophycales group than was previously thought. These reconstructions also revealed a distinct form of branching in the rooting system of A.mackiei which is not seen in living lycopsids. In extant plants, root axes originate by endogenous growth, whereby the rooting axis develops within the tissue of the parent axis and breaks through it. By contrast, A.mackiei root-bearing axes formed by anisotomous dichotomous branching of parent axes (where the tip of parental axis splits in to two unequal daughter axes). This form of branching is now extinct. 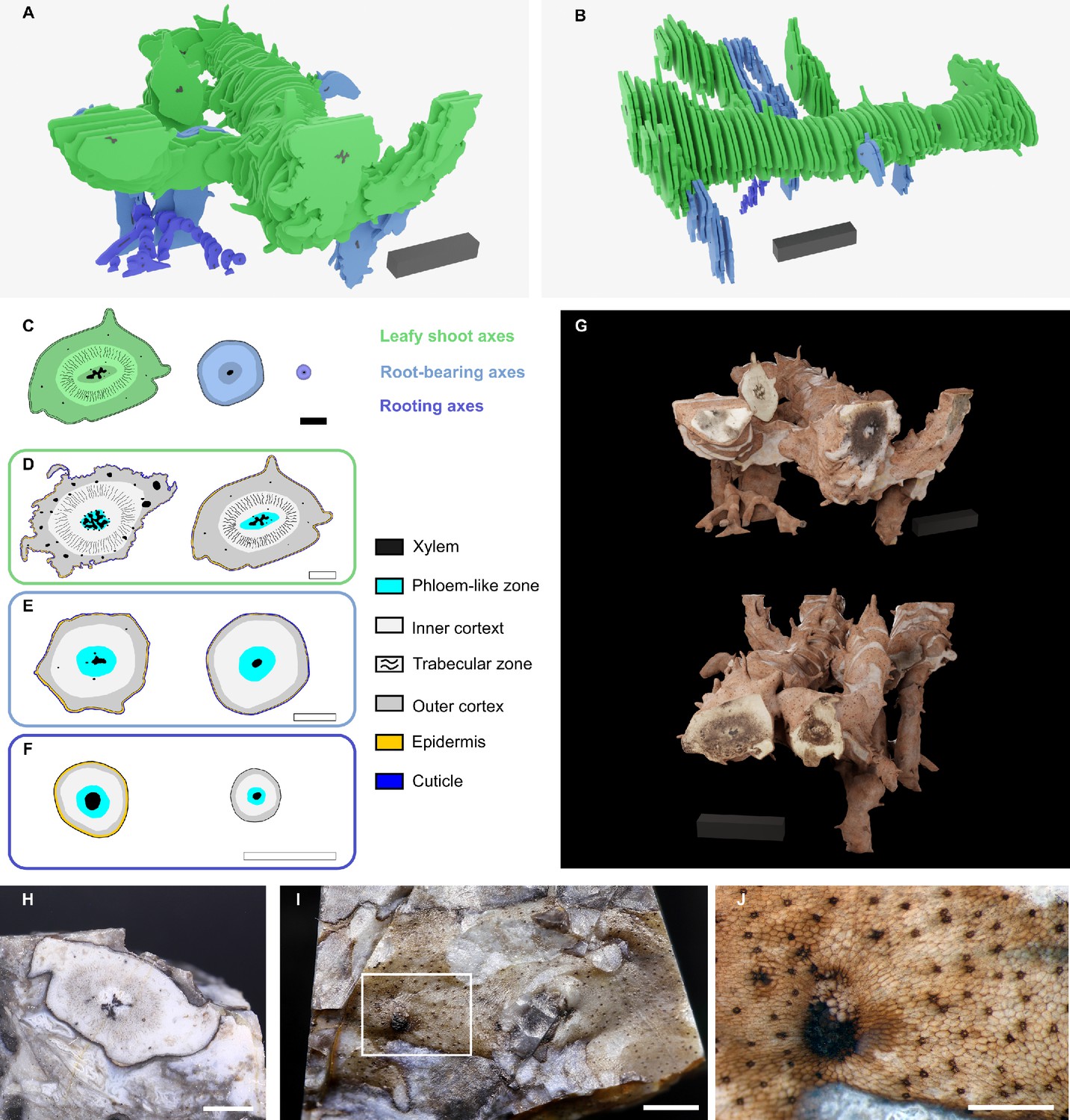 3D reconstruction of Asteroxylon mackiei based on a series of 31 thick sections. The body plan of A.mackiei was composed of three distinct axes: leafy shoot axes, root-bearing axes, and rooting axes.

My role in this project was facilitated as a BBSRC Research Experience Placement in 2019, an initiative which provides undergraduate biologists with funding for summer research projects.

“Look closely at nature. Every species is a masterpiece, exquisitely adapted to the particular environment in which it has survived.” E.O.Wilson From the early Greek philosophical musings of Empedocles and Aristotle ... END_OF_DOCUMENT_TOKEN_TO_BE_REPLACED

By Dr Gillian Petrokofsky on November 9, 2021

Do flying cows have to pay a carbon offset?

Last week I learnt an interesting fact relating to carbon offsets when flying – if you fly business class you need to pay x 2.5 more carbon offset because of ... END_OF_DOCUMENT_TOKEN_TO_BE_REPLACED

Encased within the unique Ryhnie Chert fossil system are some of the best-preserved early land plants in the world. Using pioneering digital technologies, we were able to reveal the developmental ... END_OF_DOCUMENT_TOKEN_TO_BE_REPLACED

The Spanish Conquest & the Forests of Guatemala.

Following the Spanish conquest of the territory that is now modern Guatemala (1524–1541 CE), the anthropogenic use of land use was radically transformed to support livestock husbandry, agriculture, large-scale timber extraction, mining, ... END_OF_DOCUMENT_TOKEN_TO_BE_REPLACED