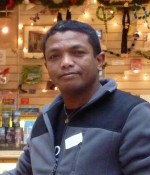 Retrospectively evaluating the effectiveness of Community Based Conservation projects in Madagascar

He has been instrumental in establishing a system of ecological protection in Madagascar, by providing technical support for the implementation of 5 out of 125 officially designated Protected Areas and the creation of 3 Ramsar sites. By training 460 local patrollers in the weekly collection of data on biodiversity and threats  he has also made a substantial contribution to the adoption of participatory ecological monitoring techniques.

Herizo’s passionate devotion to the community-based conservation approach has achieved remarkable results. His main concern is how to develop cost effective conservation programmes by integrating the community in efficient decision making. He is also interested in exploring the effective contribution that local community members can make to protect ecosystem services by sustaining financially motivating social enterprises which could reduce poverty.

In his DPhil, under the supervision of Prof Kathy Willis, Dr Peter Long and Dr Richard Young, Herizo looked at the effectiveness of community-based conservation projects in conserving biodiversity, protecting ecosystem services and improving human wellbeing in Madagascar. Using remote sensing techniques with satellite data from 1984 to 2014, village questionnaires (developed with the Oxford Poverty and Human Development Initiative, Department of International Development, University of Oxford), and household surveys (based on 6,540 households within 214 villages in 5 key conservation sites), Herizo investigated whether the community-based conservation projects implemented by the Durrell Wildlife Conservation Trust Madagascar programme have improved the conservation of biodiversity and protection of provisioning ecosystem services, and enhanced people’s wellbeing.

– Feb 2011- March 2016: Member of the national advisory committee for the P4GS Project (Can Paying 4 Ecosystem Services Reduce Poverty?) funded by NERC in Madagascar

‘Conserving biodiversity for people and wildlife in Madagascar’

‘Participatory ecological monitoring and enforcement in Madagascar – State of the art’

‘Effectiveness of REDD+ monitoring in Madagascar’

‘To what extent can we rely on village patrol data? The case of the Menabe dry forest protected area of Madagascar?’

‘Community based ecological monitoring in Madagascar’

‘Cost-effectiveness, strengths and weaknesses of a participatory approach to ecological monitoring in Madagascar’

‘Four years of experiences in participatory ecological monitoring in Madagascar. The case of Lac Alaotra’