A new tool for assessing ecological risk, developed by a team of Oxford researchers, was launched at the Oxford Martin School on October 7th 2016.

LEFT, which stands for Local Ecological Footprinting Tool, was created by a team of University of Oxford researchers – in fields from biology to computer sciences – under the direction of Professor Kathy Willis, the first Director of the Oxford Martin School’s Biodiversity Institute. It was developed as an accessible online tool for parties undertaking biodiversity risk assessments.

LEFT works remotely, anywhere in the world, by accessing globally available databases and algorithms. The user enters a region of interest via a simple user-interface, and within minutes, the tool outputs a PDF explanatory report and local-scale maps (at 30m pixel resolution), detailing areas of highest ecological risk across a specified area of land.

Included in this report would be information on areas containing rare and threatened species and their habitats; important connectivity routes across the landscape; intact forest landscapes and ecosystem mosaics; wetlands and natural water courses; and native ecosystems and landscapes containing high concentrations of beta-diversity and areas displaying greatest ecological resilience against changes in climate.

The launch took place at the Oxford Martin School on Friday 7 October. Attendees included land managers, environmental consultants, and parties involved with land-use decision-making in NGOs, alongside a number of academics. Professor Kathy Willis gave an overview of LEFT, before Dr Peter Long talked through the science underpinning the tool, and Paul Lindsell ran through the business model. Further discussion focused on how future developments of LEFT could contribute to environmental risk management in related sectors, such as human health and wellbeing, agriculture and insurance. 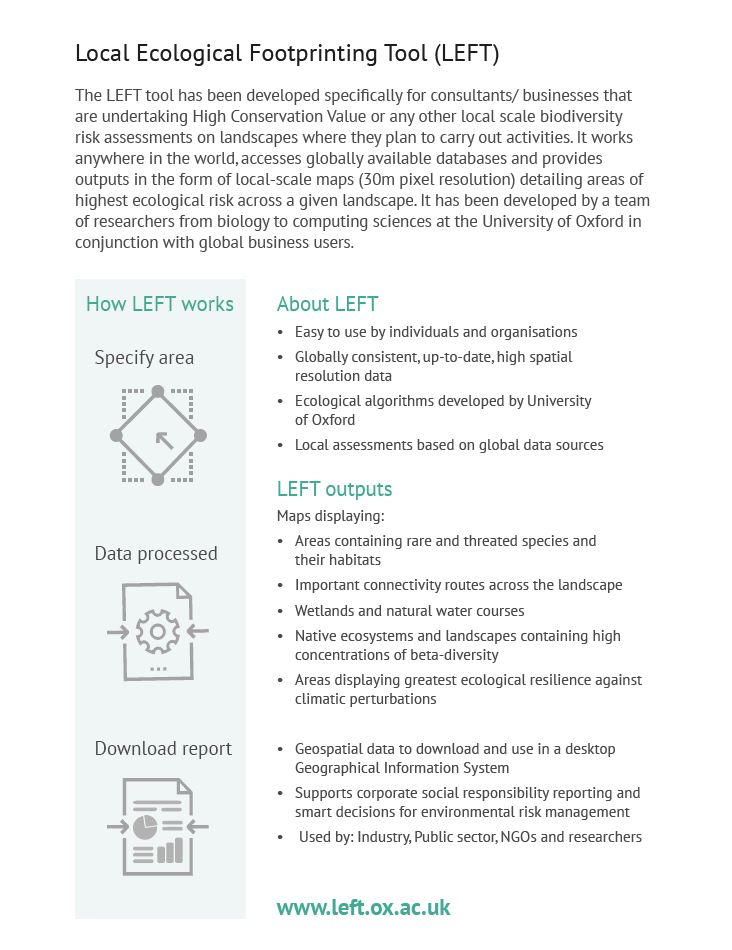 News item originally published on Oxford Martin School website. Reproduced by kind permission
Shortly after the launch event LEFT was demonstrated in China and was received very enthusiastically by land managers, academics and consultants involved in certification and sustainability standards. The image for the front of the LEFT brochure in Chinese is shown below. 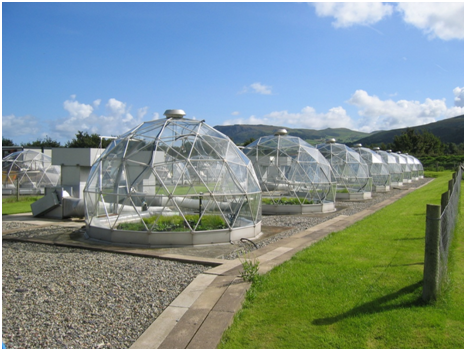 Last weekend Anna Lee-Jones, NERC DPhil student in the OXLEL group, traveled to the Centre for Ecology and Hydrology (CEH) site in Bangor, Wales to discuss an experimentation collaboration with ... END_OF_DOCUMENT_TOKEN_TO_BE_REPLACED

Professor Kathy Willis gave oral evidence as an expert witness to the Parliamentary Environmental Audit Committee (EAC) inquiry into the the protection and enhancement of biodiversity and ecosystems in the ... END_OF_DOCUMENT_TOKEN_TO_BE_REPLACED

OxLEL was delighted to host Dr Eleanor Tew as guest speaker at our weekly lab meeting on the 11th of June. Dr Tew is the national Natural Capital and Resilience ... END_OF_DOCUMENT_TOKEN_TO_BE_REPLACED

This Friday (23rd April 2021) a randomised controlled trial (RCT) aiming to understand use and uptake of the smartphone HumBug acoustic monitoring system will begin with 148 participants recruited from ... END_OF_DOCUMENT_TOKEN_TO_BE_REPLACED

Peter Long, Sandra Nogue, David Benz and Kathy Willis recently published a paper in Frontiers in Biogeography demonstating how to map the ecosystem service of outdoor recreation across Europe.  The ... END_OF_DOCUMENT_TOKEN_TO_BE_REPLACED